I saw the movie first and I really liked it. I loved the actors, the lines, the story, the images, the comfortable silences, as much as the awkard ones and the end. I haven’t noticed any resemblances between me and the main female character until… well, until I read the book (seriously now, it’s like some lines are taken from my life :)) ). Because of course that I had to read the book as well!!! …and, afterwards, watch the movie for the second time. More than 400 pages read in a couple of days. Have bought it from England; at the end of it,  readers can find a Question and Answer session with David Nicholls in which he also gives some information concerning his worries about the adaptation of the book into a movie, the difference between a screenplay (and how it’s done) and a book, his inspiration for One Day, and so on. The publishing house is Hodder& Stoughton Ld., London. 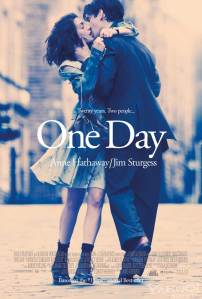 I’m not going to tell the story because maybe there are some of you that  don’t know it yet and I kind of don’t like to spoil the mystery or break the spell. However, I’d like to share with you some quotes from the book which I really liked (& underlined while reading it) and to convince you that it’s worth reading much more actually than it’s worth watching (‘cause, have to admit it, it’s worth watching the movie too).

„‘Travelling’, she sighed. ‘So predictable./’What’s wrong with travelling?’/ ‘Avoiding reality more like.’/ I think reality is over- rated.’

„just kidding was exactly what people wrote when they meant every word.”

„he was grinning, and she was reminded once more of his almost limitless capacity to disappoint.” / I got to know you. You cured me of you.'”

„Occasionally, very occasionally, say at four o’clock in the afternoon on a wet Sunday, she feels panic- stricken and almost breathless with loneliness.”

„Romantic love, is this all it is, a talent show? Eat a meal, go to bed, fall in love with me and I promise you years and years of top notch material like this?”

„Oh, it’s not just you, it’s men in general, all of you doing your number all the time. God, what I’d give for someone who just talked and listened!”

„Part of her is vaguely aware of failing as a girlfriend. It’s a new role for her, and she sometimes finds herself plagiarising ‘girlfriend behaviour’.”

„I love him, she thought, I’m just not in love with him and also I don’t love him. I’ve tried, I’ve strained to love him but I can’t. I am building a life with a man I don’t love, and I don’t know what to do about it.”

„Friends were like clothes: fine while they lasted but eventually they wore thin or you grew out of them.”

„their friendship was like a bunch of flowers that she insisted on topping up with water.”

„the feminist movement should be about equal pay and equal opportunities and civil rights, not deciding what a woman can or can’t wear of her own free on a Saturday night!”

„How does it happen that you wake up one day, find yourself in your thirties and someone’s mistress?”

„She feels the excitement in her stomach curdle into sour disappointment.”

„well you know what they say-‘ He pauses for effect.’ you always hurt the one you love!’

Sympathy for the spinster. / Once you decide not to worry about that stuff anymore, dating and relationships and love and all that, it’s like you’re free to get on with real life.”

„Self- pitying, self- righteous, self- important, all the self except self – confident, the quality that she had always needed the most.”

„Let’s not say anything. Let’s just smile, look natural. Look young and full of high ideals and hope or something. Ready?”

„Love and be loved, if you ever get the chance.”